Recycle your living spaces with our innovative folding wall beds. Convert dead floor areas taken up by beds, create new bedrooms discretely, or convert a spare room into a home office with accommodation. Take back your floor space,

The Tiffany is a vertically mounted wall bed. It is a simplistic model, featuring weight countering pneumatic gas lifts to ensure effortless operation. The Tiffany is available in single, 3/4, double and queen sizes.

The Benatar is a horizontaly mounted wall bed. It is a simplistic model, featuring weight countering pneumatic gas lifts to ensure effortless operation. The Benatar is available in single, 3/4, double and queen sizes.

The Fleetwood Library bed is a vertically mounted wall bed (also known as a "Murphy bed") which is consealed behind a bi-folding book/display unit. This product has been developed to solve modern home space constraints focusing on storage requirements.

The Collins cabinet bed is an ideal alternative to the wall bed. This product has been developed to provide a movable unit that does not require wall attachment, focusing on practicality and cost effectiveness with an aesthetically simple and neat design. The unit simply folds up and the space is transformed.

Below is a gallery of a few featured beds we have designed and installed. 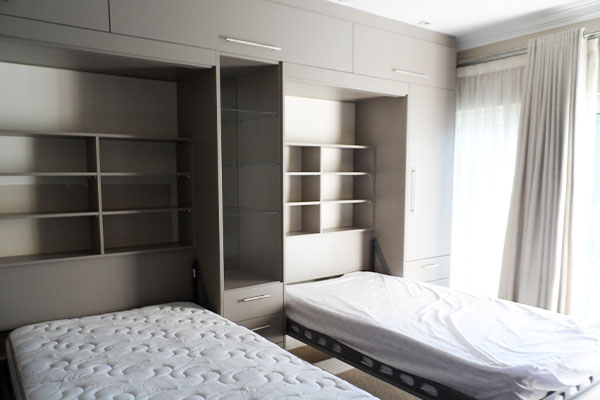 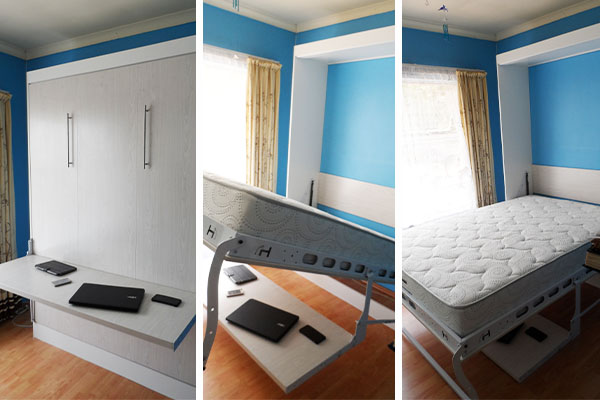 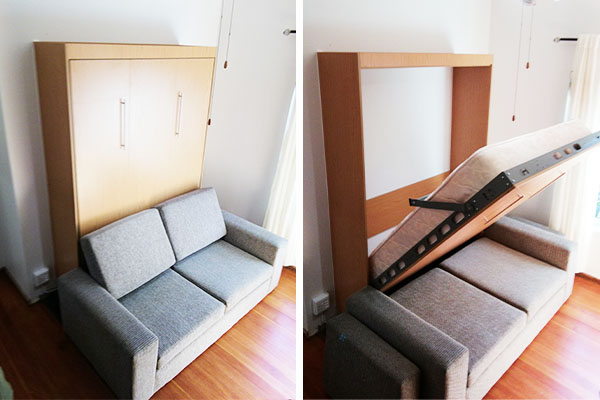 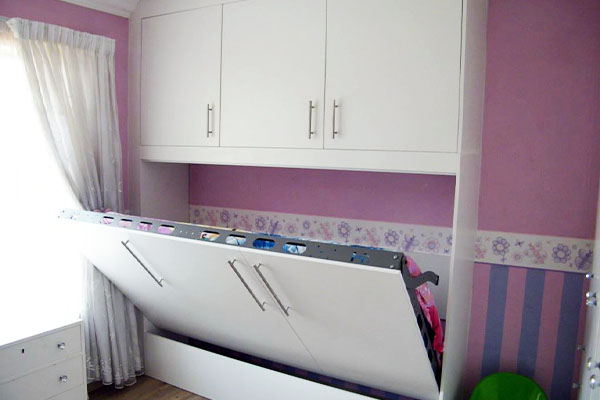 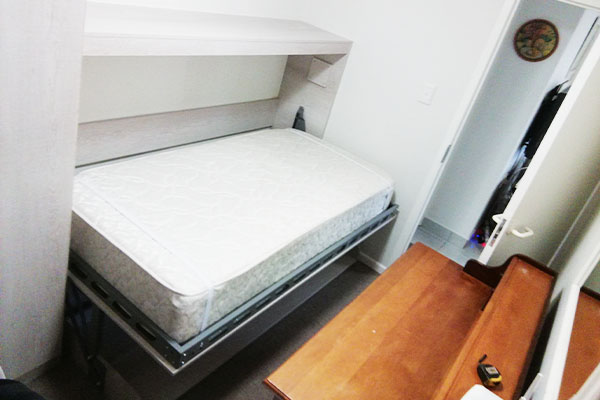 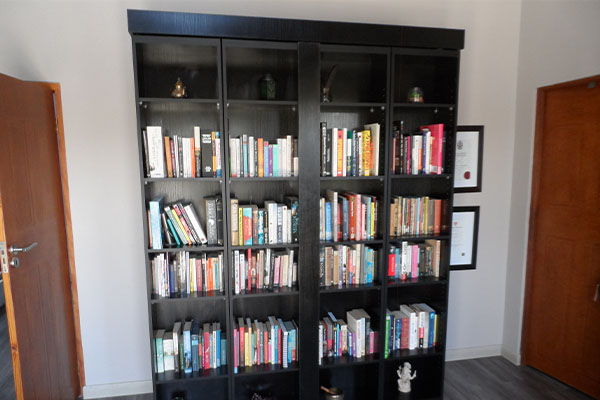 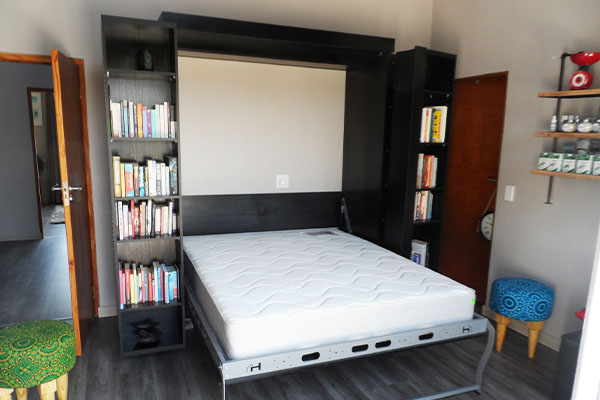 We provide the following products and services.
We will beat any written quote! All design work is conducted using the latest 3D rendering software.

This product has been developed to solve modern home space constraints focusing on practicality and cost effectiveness with an aesthetically simple and neat design.

This design is a perfect solution for modern day space constraints enabling the easy conversion of a study or home office into an extra bedroom providing sleeping and professional facilities within the same space.

This design has been focused on transforming a living room or lounge into a completely functioning spare room.

This product has been developed to provide a movable unit that does not require wall attachment, while also focusing on practicality and cost effectiveness with an aesthetically simple and neat design.

This product has been developed to solve modern home space constraints focusing on the requirement for storage for books, curios, art pieces etc while having the convienence of an extra bed.

This product has been developed to provide a cost effective wall bed for the modern DIY enthusiast.

We provide custom kitchen cabinets to meet your needs, budget and maximise your storage space.

We provide complete solutions by adding custom cabinetry to meet your needs and maximise your storage space.

We can Provide innovation custom solutions to meet your needs, bring us a problem we will find the solution.

WJD Custom Services is a Proudly South African, Gauteng based business and was founded in 2014. Our goal is to provide customised designs and manufacture of specialised wood and steel products. Our designs and products are focused on finding simple solutions to modern living. To address the consequent constraints on practical living space due to increased population, Hidden Beds-SA was formed in 2015. With an eye for detail and a love for problem solving, Hidden Beds SA is dedicated to finding innovative solutions to living space problems faced by the average citizens of our amazing country.

Our team is available to help you simplify and maximize the space in your home. Contact us today for an unbeatable quote. 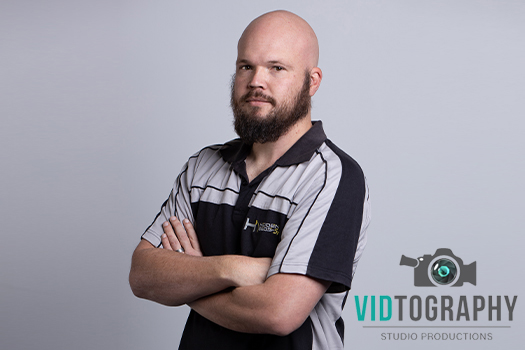 Warrick Duffey is the founder and sole proprietor of Hidden Beds SA. He is an energetic and highly motivated entrepreneur with an eye for detail and a passion for innovative ideas to enhance living space. After obtaining his Mechanical Engineering qualification in 2007, Warrick worked in the corporate environment gathering general business and management experience in hydraulic lift applications and trailer design. He also went on to qualify as a SAIW level 1 welding inspector with honours in 2014. Warrick attained competency in pressure vessel inspection (limited scope) during this time.

In 2015 Warrick developed the first prototype Hidden Bed which required rigorous testing and innovation using lightweight steel, counterbalancing and aesthetics. Warrick developed excellent skills in CAD design, shop fitting and building to specifications while training his teams to implement at the highest quality. He launched Hidden Beds SA in 2015 which has grown from strength to strength due to the innovative products and the excellent customer centric service he has built over the years.

Warrick has a passion for animals and enjoys wildlife, hiking and birdwatching in his spare time.

THE HISTORY OF THE MURPHY BED

The first document featuring a folding bed concept dates back to 1895 by Sears and Roebuck. It is also rumoured that Thomas Jefferson and Paul Revere also experimented with the idea.

The Murphy Bed was named after William Lawrence Murphy. He was the first person to apply for a patent for the invention in the early 1900’s. His company was founded within the same year, which produced his invention for sale to the general public.

Murphy lived in a one-room apartment in San Francisco. He had grown fond of a young opera singer, but being a gentleman, woman were not permitted into a gentleman’s bedroom. Using his ingenuity and the help of a local blacksmith Murphy created an invention to make the most out of the situation. The creation of the Murphy bed allowed him to stow away the bed within a closet, transforming his bedroom into a parlour. In the early 1900’s the couple married.

In 1989, the United States supreme court judged that the term “Murphy Bed” fell within public use, which unfortunately meant that William L. Murphy lost the trademark protection of the term “Murphy Bed”. The term is now defined as a “Bed that folds into a closet or up against the wall”. This court decision unleashed many competitors to start producing Murphy Beds which are also marketed as tilting beds, folding beds and hide away beds. 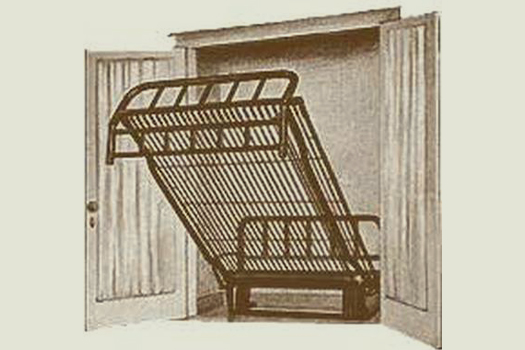 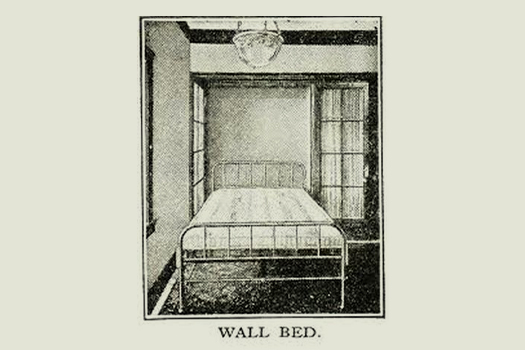 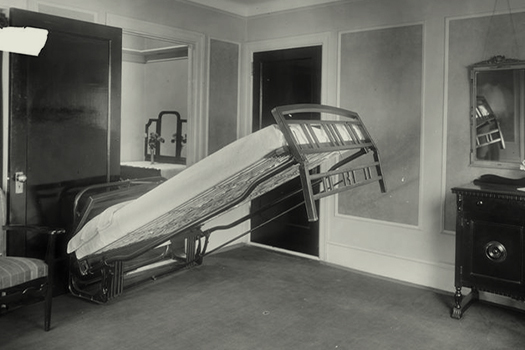 Fill out our contact form and we will get back to you as soon as we can.